Nice to meet you here!
Moving in depth through the pages and links below you will be able to reach
a lot of interesting and useful sources.

The Lone Traveler: Around the World in 115 Days>>

&nbsp08.08.2008 XXIV Summer Olympic Games in Bejing started! All the best to the Team USA! 30 June, 2008 RussianClimb.com Dodo Kopold's great success! 15th of June, Dodo Kopold and Vlado Plulik (both Slovakia) summited Gasherbrum I. They managed it from the saddle between GI and GII in one push in 16 hours (up and down, north face). In 15 days from their arrival under the Gasherbrums they both climbed Gasherbrum I and Dodo climbed also the French pillar of Gasherbrum II (alpine style, the 9th of June, when Vlado finished some 300m under the summit). June, 26 Dodo summited Broad peak. The 25th Dodo Kopold and Vlado Plulik started from Broad Peak BC. They arrived 300m below the summit in the afternoon, had some rest there and returned to 7200m, where they had left some gear. In the morning Vlado continued the normal route and probably didn?t summit. Dodo continued up, through a new variation of the route, and reached the top at about 9 pm (the 26th). He said this was his hardest climb yet in Himalaya. Conditions were really bad. He had to bivouac at 8000 meters on descent, without gear or a tent. He is now in BC. Congratulations! 23.06.2008 Wayfare on Russia Today. Kabardino-Balkaria. 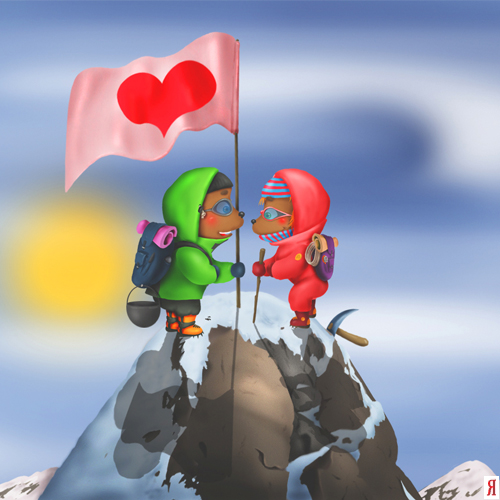 In Memory of Sir Edmund Hillary

Thank you for your time and visit!

To the News Beginning     To Top